This Mimbres funerary bowl (1000-1150 AD) once served in a ceremonial function for guiding a member of an ancient culture into the mystery of death. The bowl is part of a permanent collection on display at the Museum of Indian Arts & Culture, Laboratory of Anthropology, in Santa Fe, New Mexico. It is originally from the Cameron Creek Village of the Mimbres Valley, in southwestern New Mexico and southeastern Arizona, home of the larger Mogollon culture for which the Mimbres pueblo people were a part of. Before European contact, prehistoric Native American culture, also referred to as Ancestral Puebloans, were believed to be descended from three major cultures: Mogollon, Hohokam, and Anasazi; and were known for their distinctive pottery and dwelling construction styles.

The picture inside of the bowl is described as, “rabbit-man with burden basket”, a stylized, hard edged black painting of a human-animal figure shaped with curves, straight lines, and solid black against a spacious background of white. On the inside rim, two sets of finely painted thin bands circumscribe the near perfect circular form while a more graphic set of triangular geometric patterns radiate upward from the back of the figure towards the lower rung of bands. No value shading is apparent, as the figure is dominated by solid black with the exception of four white bands dissecting its body, head and ears, with its one eye looking directly at the viewer from a profile face. The black band across its face looks like a mask, which could indicate something hidden.

Tiny black fingers and toes stick out of the simple stump arms and legs. The arms or fore legs dangle in an unnatural way, or else the fore legs could be walking on air. Its hind legs have a more graceful stance, plant-like, not looking like they can hold the figure up. A tiny turned up tail follows the flat, stylized design of the rabbit-man along with the small protruding lips, nose, and the two rabbit ears that also look like feathers. The black triangular tips of the ears/feathers relate to the burden shape. Its body is hunched over perhaps because of the burden, represented by the radiating geometric form that seems to be holding the figure up, or possibly rabbit-man is being pulled upward by the burden shape that seems to be connecting to the rim bands. The bands also could symbolize the sky or after life.

At first glance the roughly poked hole in the center of the bowl was the obvious sign that it had a different use than to just hold something. As early as 750 AD, these pictorial Mimbres bowls were solely used for ceremonial and ritual burial functions where the dead were buried beneath their floors in individual pits. This illustration shows how the dead were buried in an upright fetal position inside of an enclosed pit with the bowl over the head. Before the bowl was placed in the pit, it was ritually ‘killed’ by punching a hole in the center with a sharp object before it was placed upside down on the head. This ‘kill hole’ had the purpose of releasing the spirits of the deceased from the body. Then the pit was filled in or covered with a stone slab.

Many of these images on these funerary bowls suggest familiarity and relationships with cultures in northern and central Mexico. The images used represented the clan totem animal or a celestial body, such as the rabbit being a common symbol for the moon found among many indigenous people in the Southwest and in Central America. Rabbits were also a food source for the Mimbres people, but the rabbit-man bowl looks like it could relate more to the moon than to a hunting scene. There is probably a narrative for this illustration that connects personally to the deceased, and I would guess that certain clan icons are also represented here. Perhaps the number of rays in the ‘burden shape’ represents a certain phase of the moon when the deceased left their body.

The large amount of the white negative space around the rabbit-man makes him appear to be floating, which could indicate outer space, or maybe the deceased’s transition to another world. It is speculated that the intention behind these images within these funerary bowls was to illuminate the deceased so maybe the rabbit could be the clan totem who comes down to enter the deceased in order to lift his burdens from this life during an auspicious phase of the moon before his death journey. The rabbit-man illustration does not seem dark, fearful or highly emotional, leading one to believe that death was not something the Mimbres were afraid of, but that it was a highly ceremonial event.

The expression on his face is trance-like and the body posture is both graceful and awkward, still there is balance between the upper anchoring of the ‘burden shape’ and the feet below, both touching the rim bands. The ‘burden shape’ holds a prominent place in the composition that gives it significance. From his backside where his tail is, this largest white space looks rather empty which could portray the life he is leaving, and the white area where his head and fore legs are might possibly be where he is going to. The outward gaze of his one eye gives the impression that he is in between the two worlds, or that he is in the unknown mystery of it all and has no choice but to go along with it.

The rabbit-man bowl is painted in the Classic Mimbres Black-on-White (Style III). By 1000 AD, the Mimbres artists perfected a black-on-white technique on their ceramics similar to the Anasazi’s black-on-whites to the north. Snow white slip was used underneath tightly rendered geometric and figurative designs created in a black mineral paint. The reason for using only black paint is unclear, when other color pigments were available. Perhaps the death realm was seen only as a black and white journey, or maybe in preparing the bowl for the deceased they thought that other colors would distract from the meanings of the narrative imagery. Many of the bowls were believed to have been used ritually prior to the burials. Due to the significance and exclusivity of these bowls amongst the Mimbres people, they were never traded outside of the Mimbres Valley, unlike other pottery, such as their polychrome White Mountain Red Ware.

The rabbit-man bowl looks like it is very light in weight and approximately 12″ in diameter and about 8″ deep. Most potters from the pueblo families were women, who would ritually pray and thank the ‘source’ for their materials and inspirations in every stage of pottery making: from gathering the clay to the processing of it, then the making of the ‘paste’, forming a clay tortilla and coils to make the vessel body, to the painting, firing, and decoration. Clays are present throughout the Mimbres valley, including occasional deposits of kaolin, and the brushes used were made from yucca leaves. “Pueblo People believe that clay has life. A sacred relationship between the potter and the clay begins when the clay is taken from the earth. Before removing the clay, the potter prays and asks Earth Clay Old Lady to be considerate of the needs of her family, ‘Just as you will eat us, you will feed us and clothe us, so please do not hide.”-Tessie Naranjo, Santa Clara Pueblo. (“Here, Now, and Always” pueblo community exhibition, Museum of Indian Arts & Culture, Laboratory of Anthropology, Santa Fe,
New Mexico)

Sacredness of materials used, as well as pictorial content, evolved with the ancient people long before the word ‘art’ came into being, which inspires one to question whether or not their works can be called art. In present times these funerary bowl paintings are often looked at as art but I wonder if this is disrespecting the spiritual boundaries of these ancient peoples as it seems that similar artifacts from other cultures fall into the same grey area. At the exhibition at the Museum of Indian Arts & Culture, I found this captivating quote that describes how these creations of the Puebloans were not separate from their soul, body, and everyday lives, but had inherent existence for them.

“Art is not found in our language. But what do we call a piece of work created by the hands of my family? What will we call that piece which embodies the life of its creator? What will it be if it has a life and a soul, while its maker sings and prays for it? In my home we call it pottery painted with designs to tell us a story. In my mother’s house, we call it a wedding basket to hold blue cornmeal for the groom’s family. In my grandma’s place, we call it a kachina doll, a carved image of a life force that holds the Hopi world in place. We make pieces of life to see, touch, and feel. Shall we call it art? I hope not. It may lose its soul. Its life. Its people.” -Michael Lacapa, Apache/Hopi/Iewa

As in most cultures, with the evolution of the independent artist grew the weakening of these traditions and the dissolution of this symbiotic relationship between a people, their craft, and their spirit. The end of Mimbres pottery production occurred around A.D. 1130-1150 and was equated with the “disappearance” of the people who made it, though later it was discovered that some remnants of the population remained in the Mimbres Valley.

Thu Dec 22 , 2022
View gallery Related Posts:Latin American Wedding Traditions Image Credit: Everett Collection Here comes THE bride! Jennifer Lopez, 52, is famous for her many turns as a blushing wife-to-be. And she’s been one in real life, too. The stunning singer and actress was married to Ojani Noa in 1997, and she […] 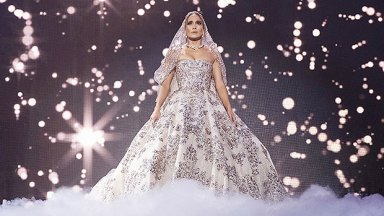