JENNIFER Lopez fans have slammed her wedding ring as “ugly and boring” after she showed off her silver band for the first time in a new photo.

JLo and Ben Affleck married in a Las Vegas-style wedding on July 16 – only months after the news of their second engagement.

JLo, 52, posted a sexy snap on Instagram of herself fresh-faced waking up in bed.

The bride showed off her wedding glow and wore nothing besides a bedsheet.

Fans noticed in the snap that JLo was showing off her silver wedding band as she held up her phone.

One fan commented: “I am seriously surprised that JLo chose a plain wedding band. I thought of some eternity ring or something that has bling.” 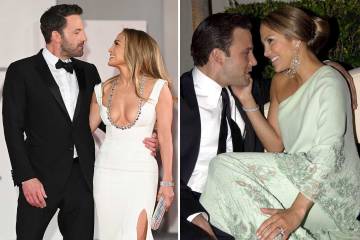 Previously, Ben proposed to JLo with a massive green diamond engagement ring worth over $3M.

Another commented: “Engagement ring turned to a wedding ring.”

Meanwhile, fans poured in comments wishing the new bride well and congratulations on the star’s “happy ever after.”

Most read in Entertainment

JLo also surprised fans by keeping her wedding to Ben low-key in Vegas.

According to court records obtained by the outlet, the couple applied for a marriage license in Clark County, Nevada.

The marriage license was taken out on Saturday, July 16.

The license was held in both of their legal names: Benjamin Geza Affleck and Jennifer Lynn Lopez.

The stars said their “I dos” while they were out in the Vegas desert.

An insider told PEOPLE that they wed in a “small” ceremony.

“It was super, super small. They just wanted to be married so they got married,” the source revealed.

JLo later confirmed the wedding, calling it the “best night of our lives” and also sharing intimate photos.

JLo and Ben have had a long and tumultuous journey to the altar, beginning over 20 years ago.

The beloved couple first met in 2002 while on the set of their movie Gigli.

At the time, the Boy Next Door star was married to her second husband Chris Judd.

But shortly after their July divorce, JLo and Ben went public with their relationship.

Fans went wild over their perfect pairing, referring to them with the endearing nickname: “Bennifer.”

Then, in November of 2002, Ben proposed to the hitmaker for the first time.

He popped the question with a custom-made Harry Winston pink-diamond solitaire ring that he picked out himself.

The Hustlers star gushed about her romance in an interview with Diane Sawyer at that time, saying that her fiancé was “brilliantly smart. Loving. Charming. Affectionate.”

The fashion designer added that her mother approved of the match and that she just “admires him in every way.”

Shortly after announcing their engagement, the duo found themselves subjected to the insanity of the media.

“We didn’t try to have a public relationship,” JLo later told People in 2016.

“We just happened to be together at the birth of the tabloids, and it was like ‘Oh my God.’ It was just a lot of pressure.”

Ben also accused the public of “sexist” and “racist” behavior towards his fiancée in a January 2021 interview.

“Ugly, vicious s**t was written about her in ways that if you wrote it now you would literally be fired for saying those things you said,” he recalled.

Then, in July of 2003, rumors ignited that Ben visited a Vancouver strip club.

The actor, who was filming Paycheck at the time, had only just appeared in an intimate Dateline interview with the performer.

That night sources alleged that he “cheated on her with at least one woman and that the encounter might be on tape.”

However, another insider later claimed that Ben only drank “water” and “never touched” any of the strippers.

The famed lovers were set to tie the knot in September 2003 but just one day prior to the ceremony decided to postpone the wedding.

“Due to the excessive media attention surrounding our wedding, we have decided to postpone the date,” they explained at the time.

“When we found ourselves seriously contemplating hiring three separate ‘decoy brides’ at three different locations, we realized that something was awry.”

They continued: “We began to feel that the spirit of what should have been the happiest day of our lives could be compromised.

“We felt what should have been a joyful and sacred day could be spoiled for us, our families, and our friends.”

In the wake of the wedding cancellation, Ben and JLo took a short break, before rekindling and then officially called it quits in January of 2004.

Her representative issued a statement, reading: “Jennifer Lopez has ended her engagement to Ben Affleck. At this difficult time, we ask that you respect her privacy.

“I am not going to confirm anything about his personal life. We don’t want to get dragged into quicksand. Everybody wants a war. It’s not happening from our side.”

But by April 2021, shortly after her dramatic split from ex MLB player Alex “A-Rod” Rodriguez, JLo and Ben began seeing each other romantically once more.

In July of last year, Jen and Ben went Instagram official after sharing kissing photos from her 52nd birthday vacation.

At the Venice Film Festival in September, the pair made their first red carpet appearance since their breakup 20 years before.

Then, in February of 2022, JLo opened up about her romance with Ben, telling People in their Love Issue: “I feel so lucky and happy and proud to be with him.

“It’s a beautiful love story that we got a second chance.”

Sat Jul 23 , 2022
Kylie Jenner is embracing bridal vibes in 1 of her newest appears to be. The 24-calendar year-old elegance mogul and actuality Tv star not too long ago shared a set of video clips on TikTok where by she can be noticed sporting a white cone-bra minidress. Jenner documented her girls’ […]