STACEY Solomon and Joe Swash are now married after a beautiful ceremony at their £1.2million home, Pickle Cottage.

And ever the DIY goddess, there was lots about the wedding that the Loose Women star, 32, did herself to create her dream day.

A source told MailOnline: “Stacey and Joe had the best day of their lives.

“It was exactly everything they had hoped for, the weather was glorious, and they had a joyous day with their children and family.”

And Essex-based Stacey certainly was hands-on with the preparations.

At the beginning of the wedding planning process, after Joe proposed in 2020, Stacey said: “I want to make as much as I can because I just enjoy it so much, signs, hair bits, table decorations, centrepieces, invites, it’s just all so exciting.”

From cheap favours to dyeing her wedding hair, here’s how Stacey created her dream DIY wedding….

Stacey revealed how made her own wedding favours, and they only cost 65p each.

Posting on her Instagram Stories, Stacey explained how she bought some “make your own coasters” which cost £13 for 20 on eBay.

She wrote: “These coasters are from eBay – I just typed in ‘clear round coasters to fill’.

Dyed her own hair

The TV star unveiled a brand new look as she prepared to become Stacey Solomon-Swash.

Stacey has ditched the red-head look and returned to the bright look she had back in her X Factor days – and dyed her hair at home herself.

She explained the makeover, which took four days, was a chance to “be back to me” before she tied the knot.

Remember Joe’s romantic proposal with the flowers in the woods?

Stacey saved the petals to be used at her wedding.

The star revealed how she’d bought 63 personalised stickers from SweetBackFlip for £6 – which cost just 10p each.

Meanwhile, Stacey also bagged some push pops for only 50p each on Amazon and had filled them with petals from the company Luxury Petals.

“The white petals I’ve dried myself,” she said. “I got some lovely white flowers after we got engaged and so I saved the petals and dried them.”

Hosted it at home

Instead of forking out for a pricey wedding venue, they kept the day very close to their heart, at home.

The source added: “It was also important to Stacey for her day to uphold her strong Jewish values, as well as be a modern and fun day for everyone.

“They had always wanted their wedding to be just for them, at their home, and keeping their celebrations intimate did not disappoint.”

Made her own sparklers

Stacey also made her own sparkler bucket for the big day.

Showing them off to fans, she said: “Put these in a bucket of sand and will keep them in the old bath outside until the day.

“We thought it would be nice if everyone lights a sparkler with us after the sun goes down on our special day.'”

Stacey earlier revealed how she had sparklers made specially for the big day, which she decorated with cardboard wedding tags, as the final details for her wedding prep.

Used cut offs from her dress for Rose’s outfit

The mum-of-four revealed she made her wedding day extra special by matching her nine-month-old daughter Rose’s dress and shoes to her own.

In a sneak peek to fans, Stacey showed how Rose’s dress has been made from material from her own wedding dress.

Stacey explained: “So I wanted to make her some shoes to match mine.

“So I brought glittery bows from Etsy and stuck them on her baby shoes [well-up-eye emoji] Now we fully match [crying emoji].”

She added: “Rose’s dress is being made from the off cuts of my dress.”

Made her own Greek pergola

Stacey revealed her incredible garden glow-up after transforming her patio into the wedding breakfast location of dreams.

Inspired by the surroundings from her Greek hen do, it was all hands on deck yesterday as Stacey’s Pickle Cottage garden had a Mediterranean facelift.

Sharing a video of the finished product, Stacey said: “A little Pergola Wedding glow up.

“When I went on my hen do to Greece I fell in love with the bougainvillea and all of the white walls and beautiful surroundings.

“We want to have a family breakfast after the wedding under the pergola so, we decided to paint the pergola white and @emlouflowers found the most perfect pink flowers and we spent yesterday making our Greek wedding breakfast set up come true.”

Made a wedding door

Even Stacey’s front door has received some TLC.

Dressed in a pair of bridal white pyjamas, the mum-of-four looked chuffed as she posed earlier this month in front of her wooden door emblazoned with the phrase Mr and Mrs.

The area had been adorned with a stunning floral arch and surrounded with sweet trinkets including candles in see-through holders.

White roses blossomed from plants growing in wicker pots and a heart-shaped flower instalment could also be seen propped up at the front.

Stacey was determined to have a guestbook for her loved ones to share their happy memories of the day.

Throwing herself into the project on an uneventful Saturday night in lockdown, Stacey began by unscrewing one of her son’s old, unwanted globes from the base and spray-painting it gold.

Next, she carefully cut into the globe to remove the plastic map and covered the cracks in TipEx.

After reattaching the pristine white globe to the base, Stacey added the ‘forever begins today’ labels she’d bought online.

Stacey said guests would be able to sign the globe at the wedding.

Every inch of Pickle Cottage has had attention for the special day.

The former X Factor star told fans she was giving her Christmas lanterns a makeover so they match the theme of the wedding.

Posting clips of her spraying the lanterns from bronze to silver, Stacey explained: “So I’m decorating the front door for the wedding.

“I spent today changing all of my Christmas door decorations to wedding theme.”

Tue Jul 26 , 2022
VANCOUVER, BC / ACCESSWIRE / July 19, 2022 / CMC Metals Ltd. (TSXV:CMB)(Frankfurt:ZM5P)(OTC PINK:CMCXF) (“CMC” or the “Company”) is pleased to announce that positive soil geochemical surveys coincident with geological and geophysical data have served to identify the potential for gold and polymetallic mineralization at its Bridal Veil Property in […] 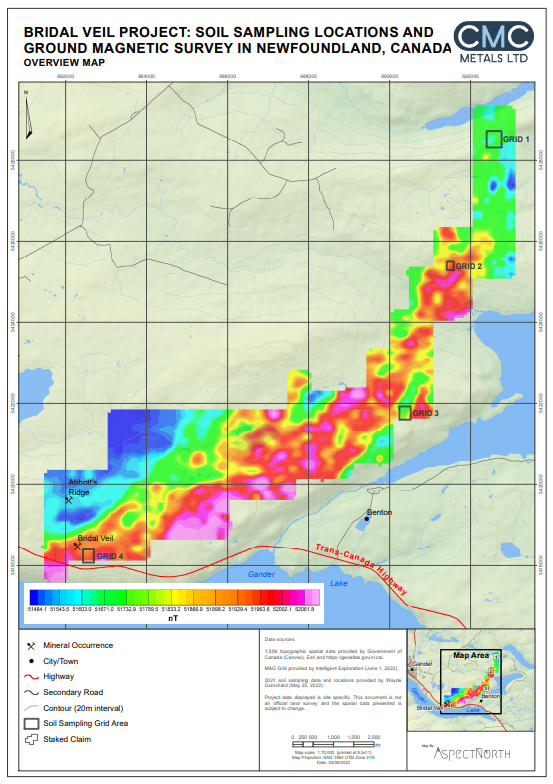