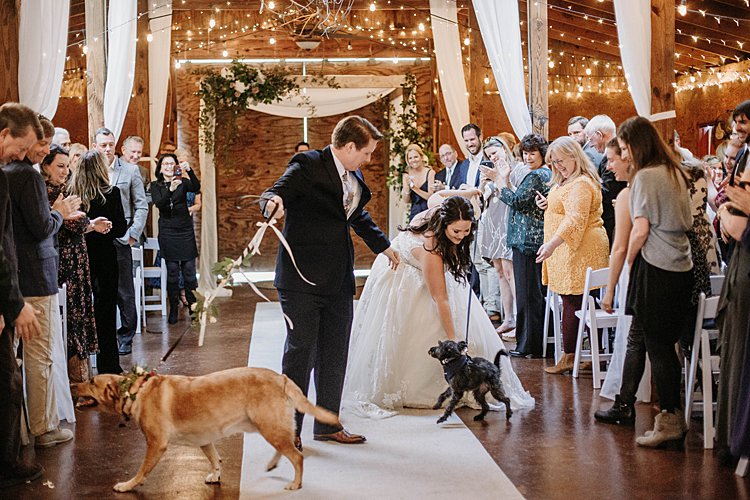 This is a guest post by Rabbi Robyn Frisch, Director of the Rukin Rabbinic Fellowship for 18Doors and founder of the Mazel Pups Facebook Group. Rabbi Robyn loves dogs just as much as she loves Jewish (and Jew-is) weddings – and having officiated at many over the past 20+ years, she’s seen it all and is channeling her wisdom into some great tips about involving your furry best friend in your big day.

“Will there be a ring bearer?” I asked the wedding couple, after they informed me that the bride’s four-year-old niece was going to be the flower girl. This was 22 years ago. I was a newly ordained rabbi, and it was one of the first weddings I officiated. The couple was planning a small, intimate ceremony in the groom’s parents’ back yard. 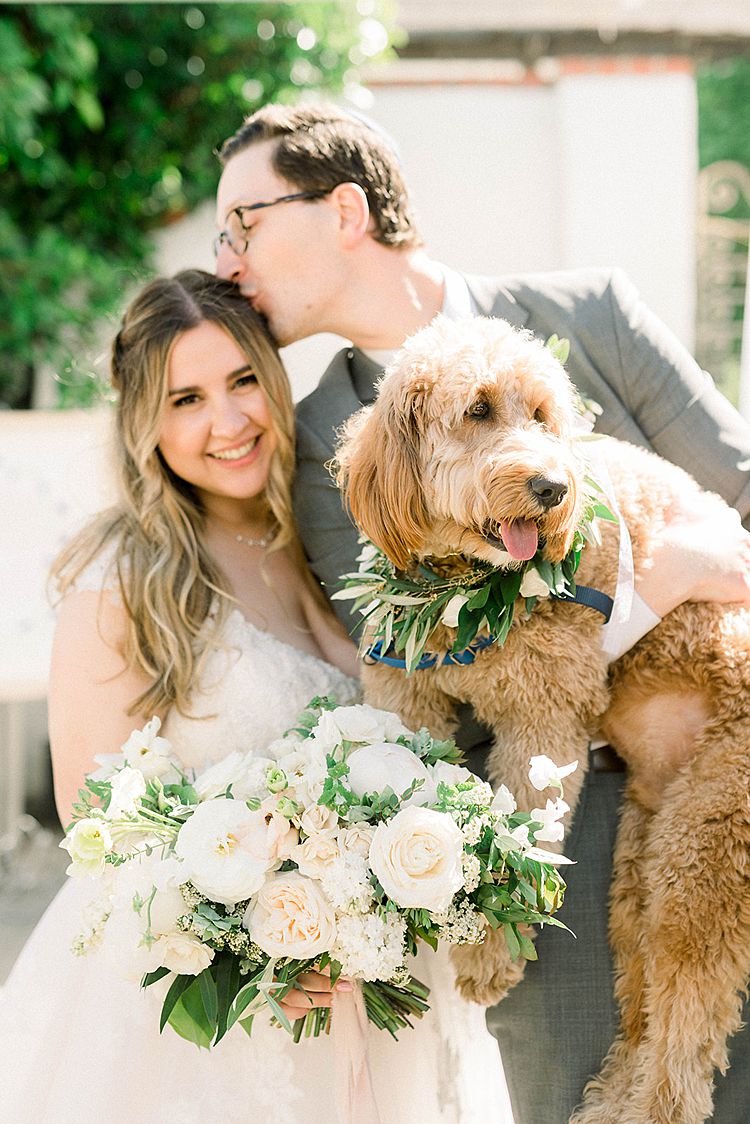 They told me that yes, there would be a ring bearer: their Yorkshire Terrier. He’d walk down the aisle by himself with plastic rings tied onto a bow around his collar. The best man would be holding the couple’s actual wedding rings. “How bizarre!” I thought to myself. In the handful of weddings that I’d officiated, a couple of them had ring bearers – but they were HUMAN ring bearers – all little boys under the age of five. As I imagined a dog – even a cute, well-trained little Yorkie – in the ceremony, a list of all of the things that could possibly go wrong ran through my head. 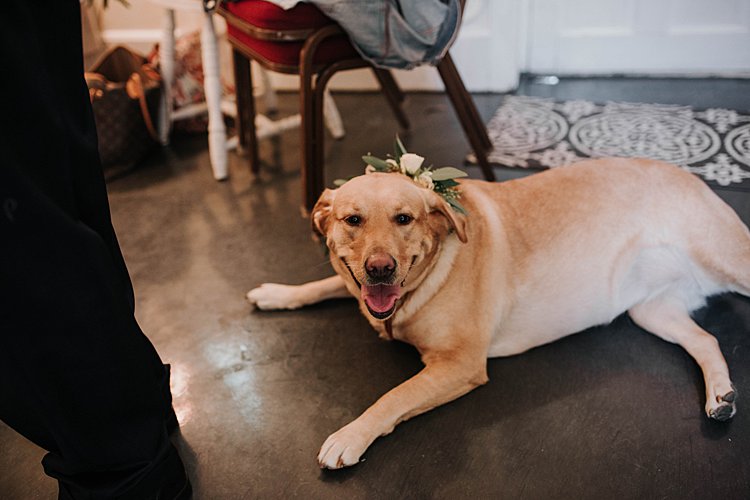 But the couple insisted that their dog be the ringbearer, and so he was. And I’m happy to report that the dog did a great job. He walked down the aisle on his own – stopping briefly once or twice to sniff the grass and look at the guests – and when he met the groom at the Chuppah (wedding canopy) he was rewarded with a scratch behind his ears and a Milk Bone treat subtly removed from the groom’s pocket. 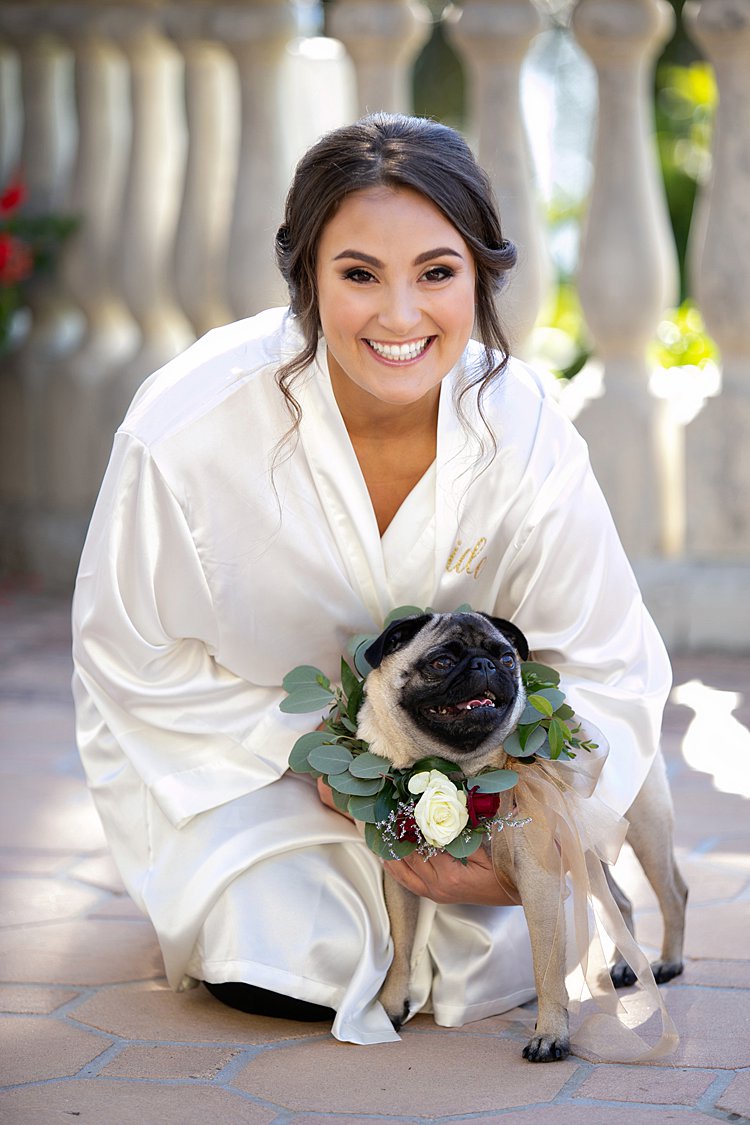 For many years after that wedding, I didn’t see or hear much about dogs being part of weddings. But in recent years, many couples I’ve married have dogs who aren’t just incredibly important parts of their lives, but who’ve also played roles in proposals; engagement and wedding photos; and wedding ceremonies. 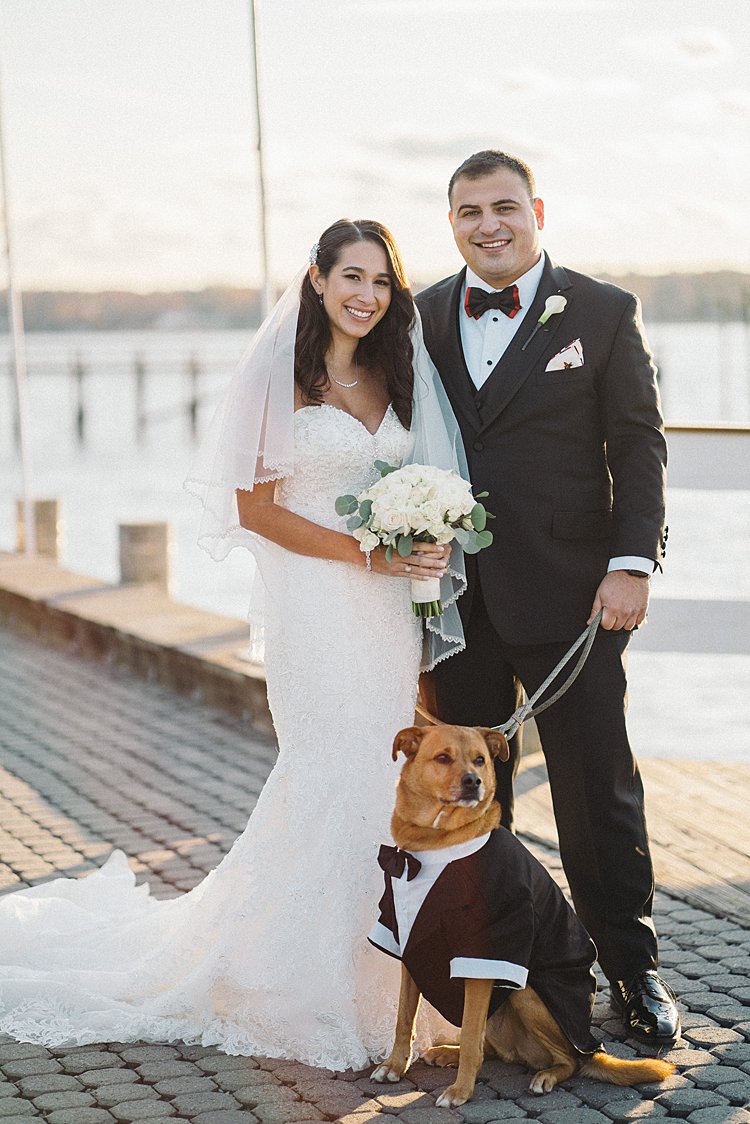 For some couples I’ve worked with, the dog’s involvement starts with their engagement. For example, Sydney and Andrew already had rescued their dog Jasper together, and Sydney felt that Jasper was ready for a sibling. Her hints to Andrew weren’t so subtle: Sydney started sending Andrew pictures of other dogs they could rescue. She had no idea that Andrew was already in the process of looking for another dog to add to their family – and that he was planning for that dog to be a central part of his proposal. 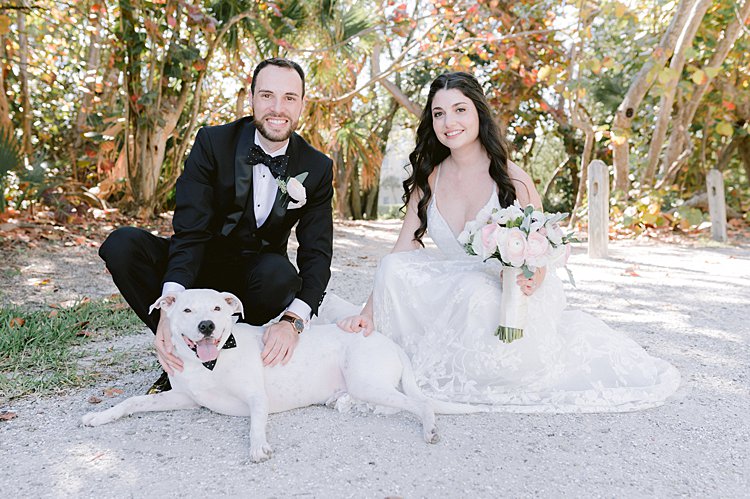 Samantha and Scott‘s Jewish wedding, with furry friends on the guest list | Photo by Starfish Studios

One day, Andrew came home holding roses – and a dog! Sydney was so excited about their new dog Pippa that it took her awhile to notice that Pippa was wearing a tag that said “Will you marry me?” Ultimately, Sydney did see the tag, and ended up that day with both a new dog in the family and the love of her life as her fiance. 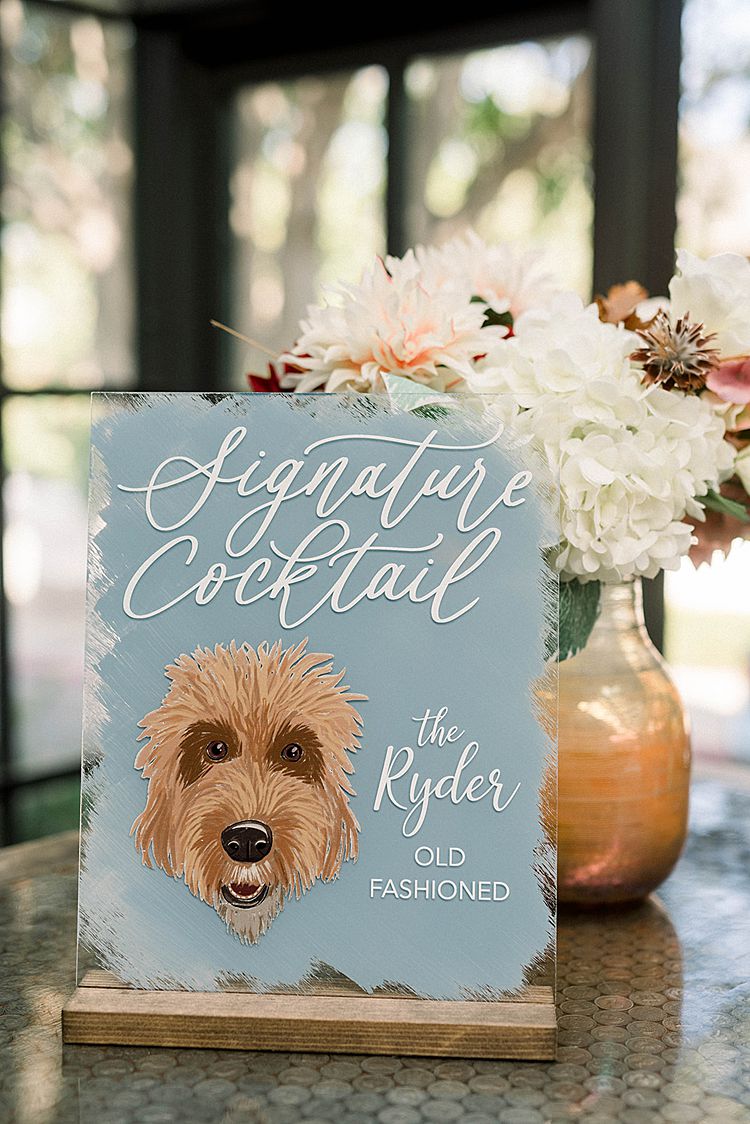 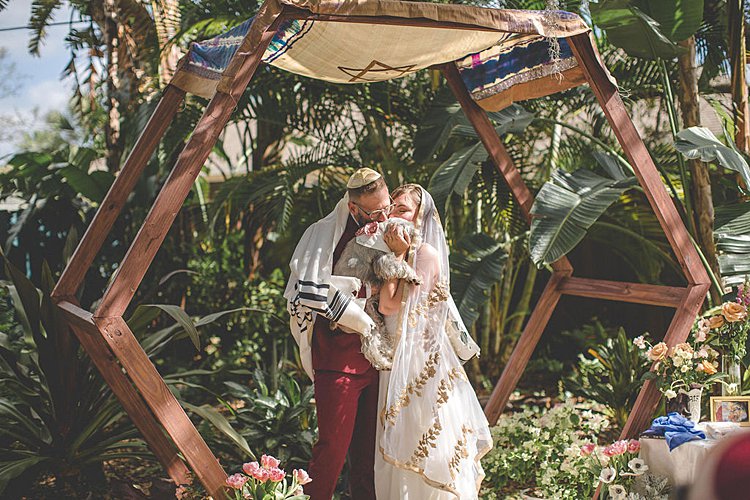 Even couples who don’t have their dog in their wedding ceremony often want to have pictures of their dog with them on their special day. As with engagement photos, usually someone who the dog is comfortable with – who isn’t going to be staying for the ceremony – will bring the dog to the venue or location where pictures are being taken at some point before the ceremony. 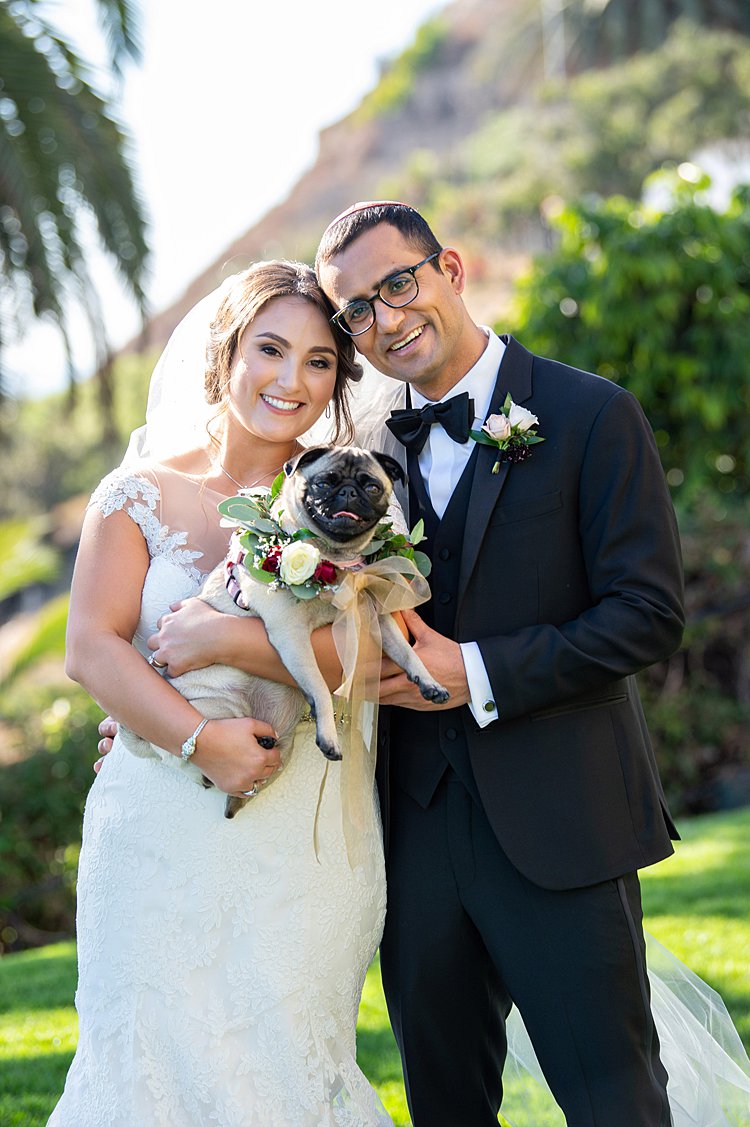 It’s not unusual for the dogs to be “dressed up” for these photos – for example, a male dog might have on a bow tie or a female dog might be wearing bows on her ears or on top of her head, or the dog may even have on a dressy “outfit.” 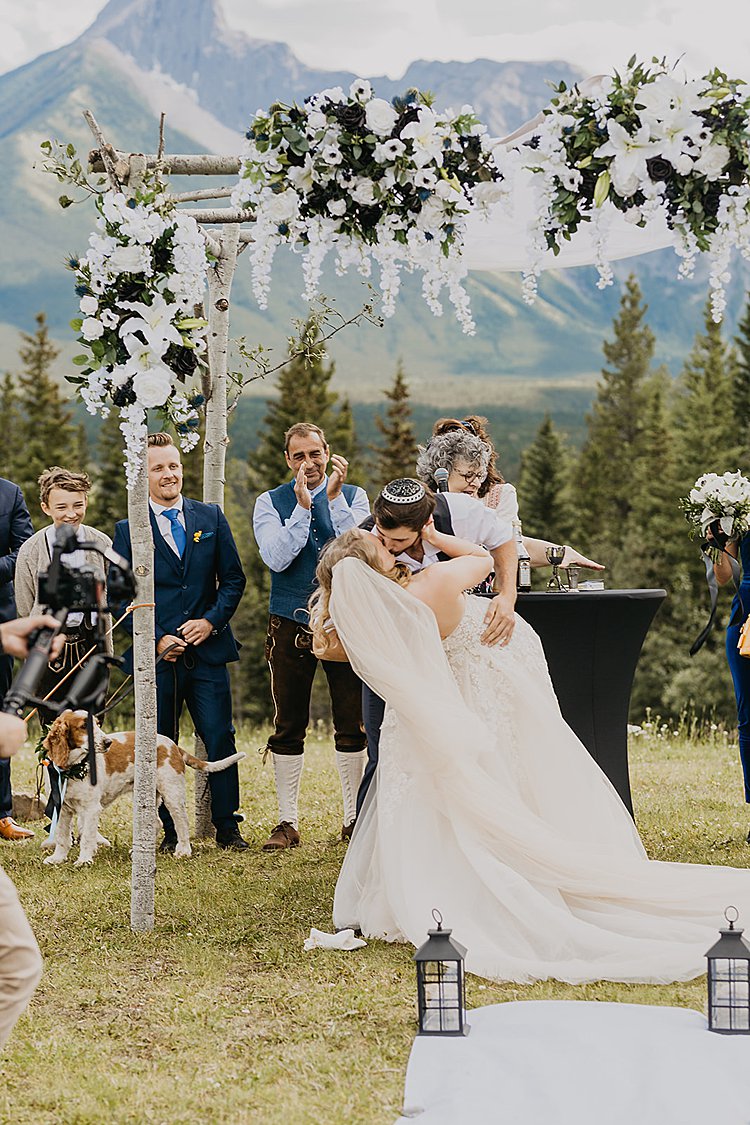 The wedding couple will take some cute pictures with their dog – often several posed pictures, and maybe some pictures of the couple walking the dog if they’re getting married outside or there’s a good outside space for pictures. Then, whoever brought the dogs will take them home or somewhere else before the ceremony begins. 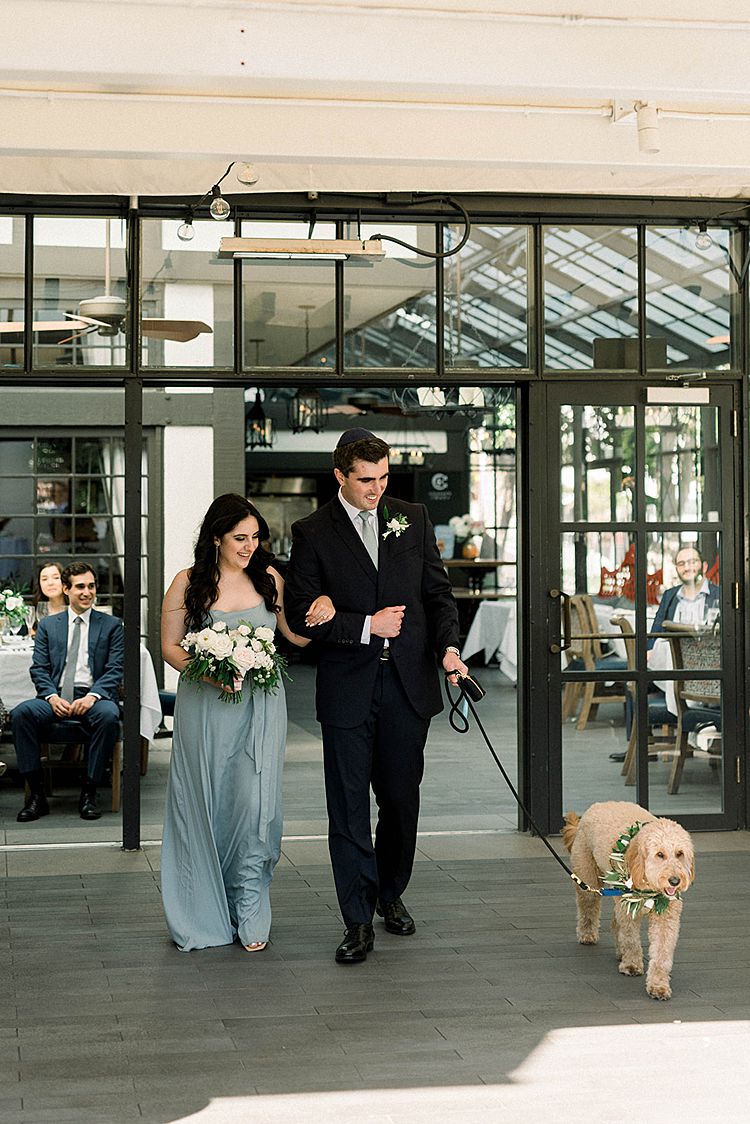 Some couples want to include their dog – or dogs – in their wedding ceremony. Typically, dogs are either walked down the aisle by someone in the wedding party, or by someone such as a dog walker who the dog is comfortable with. Most couples who have their dog walk down the aisle then have someone take the dog out of the area, so there’s no risk of the dog being disruptive during the ceremony. 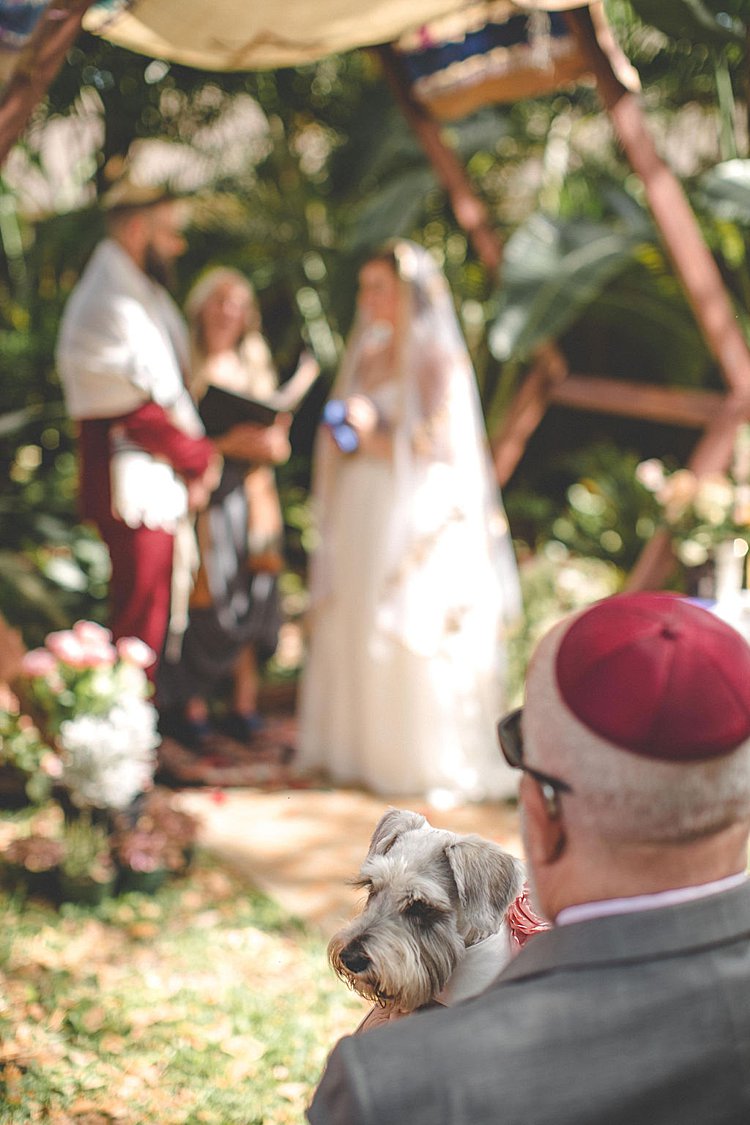 It’s not uncommon to have a dog walker or someone else who isn’t a wedding guest present for the procession – regardless of whether or not they’re the one who walks the dog down the aisle – and then they can take the dog somewhere else immediately after the procession. Other couples want their dogs to stand with the wedding party during the ceremony, so the dog walker or someone else will sit near the front or stand off to the side and be “on call” if the dog can’t stand or sit quietly – in which case they can quickly take the dog to some other location. 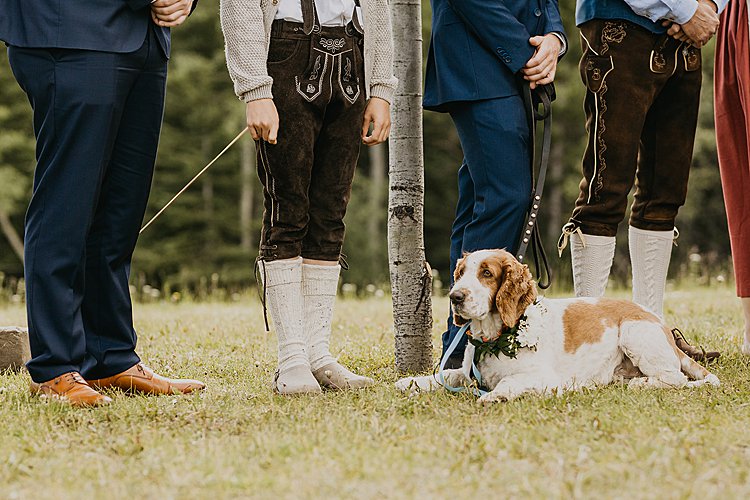 Just like the young flower girl or ring bearer who may decide at the last minute that they don’t want to walk down the aisle, or who may start crying, or who may need a parent to walk with them or carry them – or who may totally “steal the show” by doing something absolutely adorable but unexpected – no matter how well trained your dog is and no matter how many times you rehearse, there can never be a guarantee of what a dog will do as they walk down the aisle. As long as the couple can handle that, then I say: go for it! 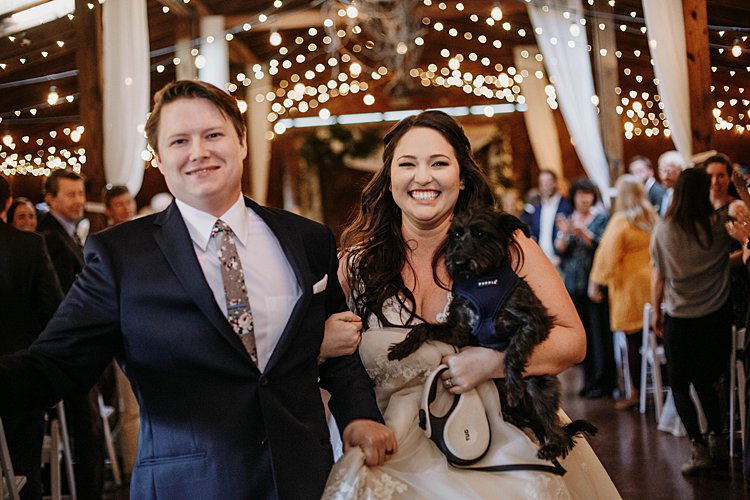 Recently, I officiated the wedding of Jordyn and Charlie. Jordyn and I had bonded in our very first conversation – in which she told me about her dogs Addie and Mason – over our shared love of dogs. Jordyn had Addie before she even met Charlie. Then, when they were together, they rescued Mason. Jordyn and Charlie never questioned whether Addie and Mason would be part of their wedding ceremony. During the procession, the two dogs followed two adorable human flower girls down the aisle as ring bearers, looking especially handsome in their custom-made tuxedos. After they walked down the aisle and stood up front for the beginning of the ceremony, their groomers, who had been standing off to the side of the groomsmen, took them to another location for the rest of the ceremony. 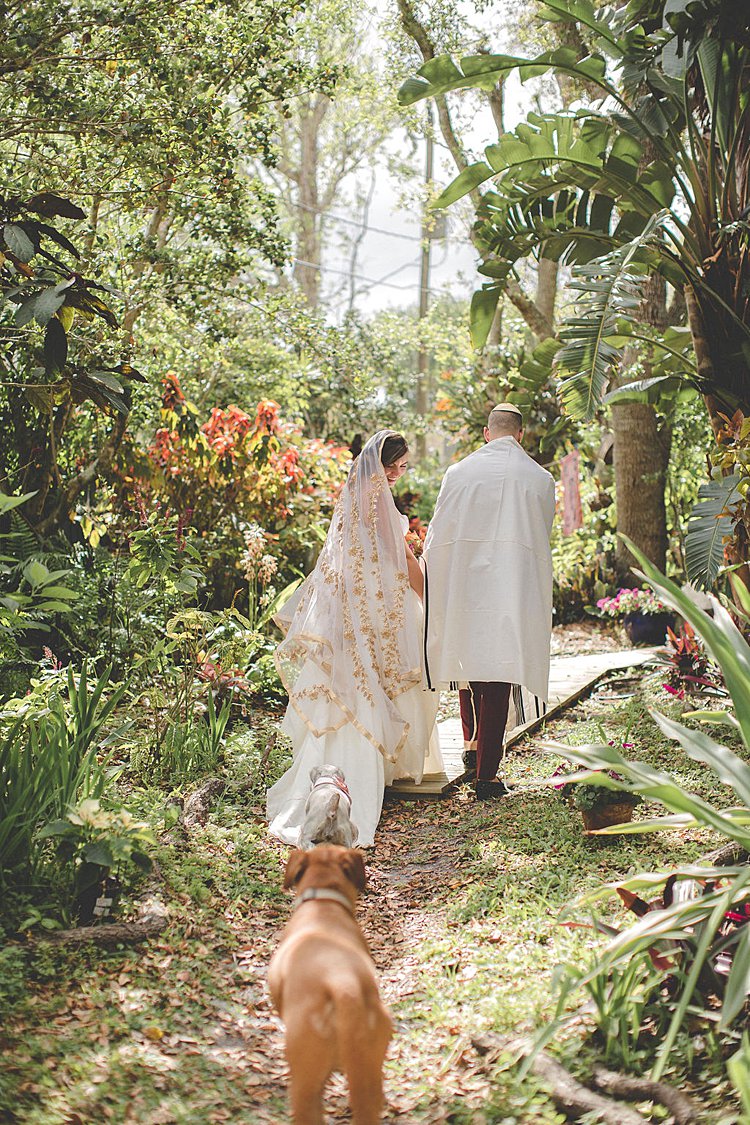 Once I even had a dog accompany a bride down the aisle. I was marrying a wonderful lesbian couple, and at one of our final meetings, one of the brides told me that she was planning to have her dog walk her down the aisle. As this was something I’d never experienced before, I asked her why. She explained that she’d waited a long time to come out as gay, knowing that her parents would have difficulty with her identity, and that even though her parents would be at the wedding, she knew that they didn’t fully accept that she was gay. Her dog, however, had accepted her for exactly as who she was from the moment that they first met. I was so touched by the impact that her dog’s unconditional love had on this bride that I had tears in my eyes as she and her dog walked down the aisle together. 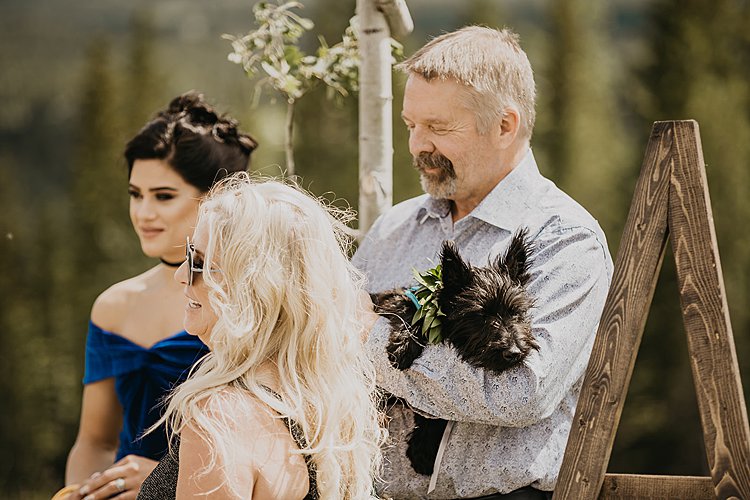 For those of us who have dogs, they play an important role in our lives and often in our relationships. We love them – and they love us – unconditionally. It makes sense that wedding couples want to find ways to include their dogs at this special time in their lives, whether it’s by including them in proposals, engagement and/or wedding pictures, or by including them in the wedding ceremony. 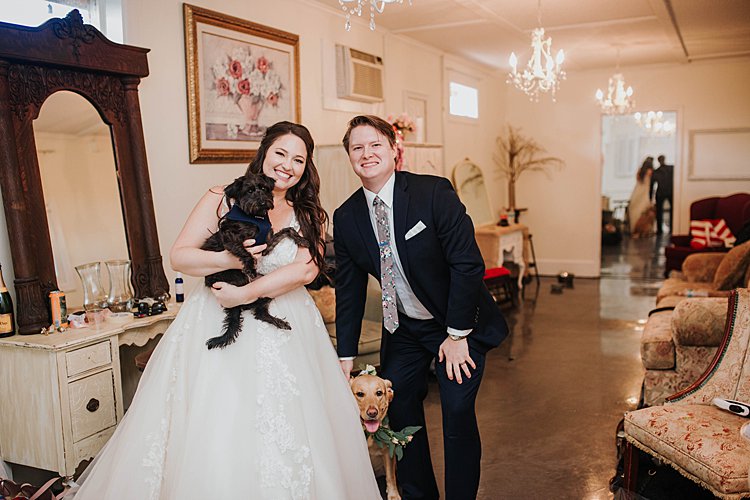 The wonderful thing is that there’s no right or wrong way to do things when it comes to dogs and weddings – whatever feels right to you and your partner IS the right thing. Best of all, your dog will never know whether or not they’ve been included. Whether they weren’t in a single engagement or wedding picture or whether they were in lots of pictures and they participated in the ceremony, they’ll love you just as much after your wedding as they did before. The first time you see your dog after your wedding ceremony, odds are that you’ll be greeted by a wagging tail and lots of wet kisses – the best Mazel Tov you could ask for! 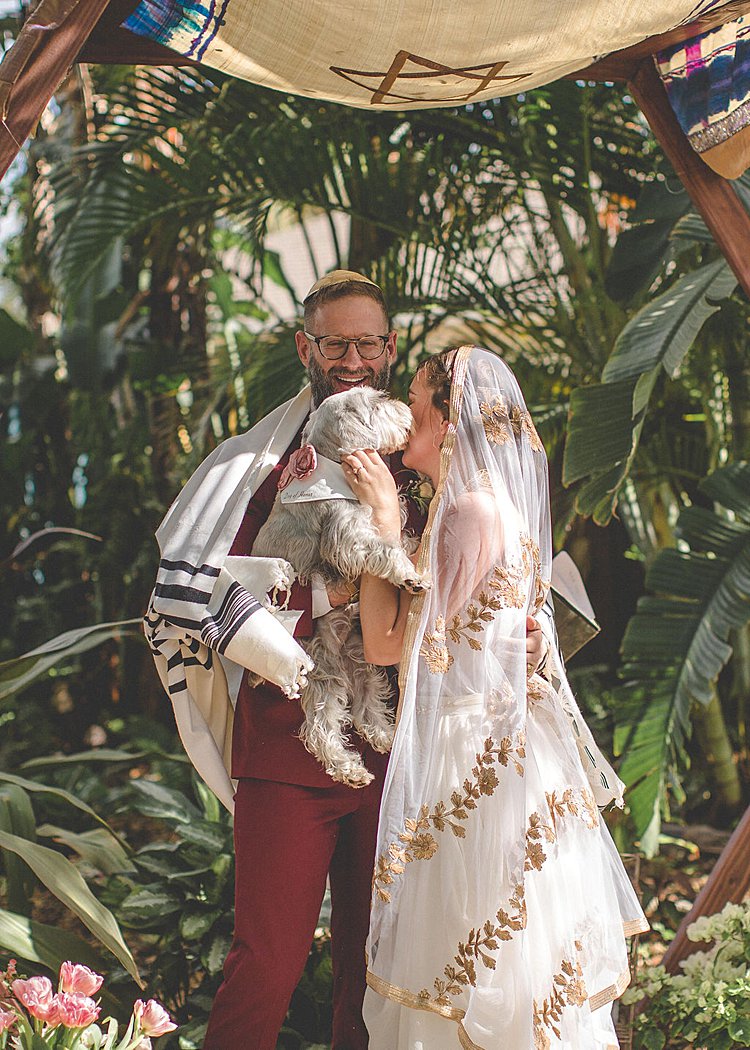 Rabbi Robyn Frisch is the Director of the Rukin Rabbinic Fellowship for 18Doors and the spiritual leader of Temple Menorah Keneseth Chai in Northeast Philadelphia. She and her husband, Rabbi Seth Frisch, are the proud parents of three children and two rescue dogs. In early 2022, she created the Mazel Pups Facebook Group  for people who are Jewish or Jew-ish (however they define it) who love dogs. She’s now also on Instagram @mazelpups, and she’s looking forward to the adventure of growing Mazel Pups.

A Grace Loves Lace Bride for a Desert Jewish Wedding at The Lodge at Ventana Canyon, Arizona, USA - Smashing the Glass

Sat May 21 , 2022
Today we’re featuring the wedding of a very special Smashing The Glass Brides Club member Jenna! You see, way back in the Before Times, Jenna hosted the very first NYC Brides Club meetup – a challah bake at her place in Brooklyn, which, as […] 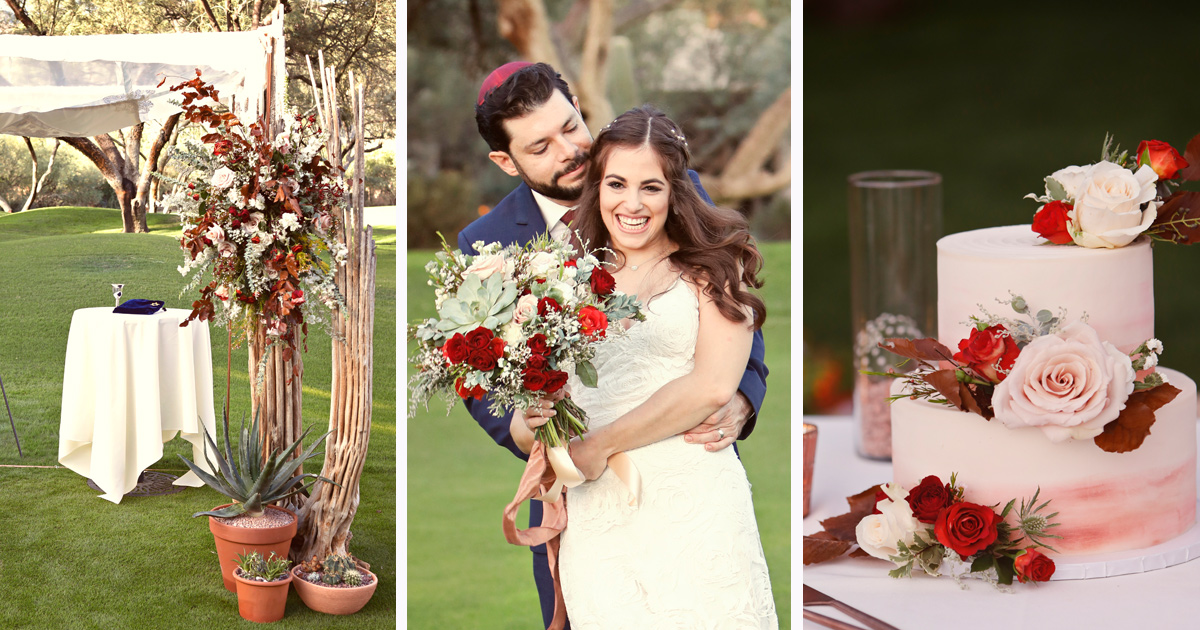